Reading is Always in Season !

Whatever the season, all the year through
reading is always a great thing to do!

In spring, when it's raining, you'll find that it's fun
to curl up by a window and read with someone.

In summer, step out and read in the shade
under a tree or umbrella and drink lemonade!

As autumn days get cooler, and the fall leaves turn bright,
you can read scary stories for a Halloween fright!

During cold winter days find a cozy place to sit,
pick out a good book and read for a bit.

You see, all year long, you never need a reason-
books and reading are always in season!
Posted by Susan at 10:27 AM No comments: 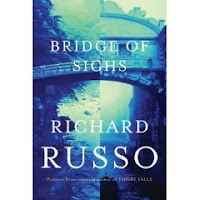 Six years after the best-selling, Pulitzer Prize-winning novel "Empire Falls" was published, Richard Russo returns with a novel that expands even further his widely heralded achievement. If you have already read "Empire Falls", you are familiar with the talented Russo and the attention he gives to small-town America. You will enjoy his newest work, "Bridge of Sighs". If you are not familiar with Russo, check out "Empire Falls" first.
Posted by Susan at 2:45 PM 1 comment:

Found in the Stacks

We have just re-discovered the writings of Eugenie Price who was best known for her historical fiction set in .

Miss Price was born in , in 1916. She spent time in college and then went to work for NBC writing for various daytime serials By the 1960s, she was well known in the radio broadcasting business, had written eleven non-fiction books, and traveled extensively for speaking engagements around the country.

In 1961, while en route from to for a book signing, Price visited St Simons Island in for the first time. She had read about the island in a AAA Travel Guide which mentioned the story of a young minister, Anson Greene Phelps Dodge Jr., who in 1884 had rebuilt in memory of his bride, Ellen, who died of cholera on their honeymoon in . The church had been severely damaged by Union soldiers during the Civil War (1861-65). Price’s three years of research resulted in the St Simons Trilogy (The Beloved Invader, New Moon Rising, and Lighthouse. She would spend the remainder of her life writing historical novels set in the American south.

The Florida Trilogy, Savannah Quartet, and the Georgia Trilogy followed. Although her early books focused on real people who lived in coastal Georgia during the eighteenth and nineteenth centuries—James Gould, Horace Gould, John Couper, Mary Gould, Anna Gould Dodge, and Anson Greene Phelps Dodge Jr.—her later novels featured fictional characters. It is the earlier novels that bring tourists to St. Simons year after year, where they walk among the moss-draped oaks in , searching for the graves of the islanders brought back to life in Price's books.

Eugenie Price passed away in 1996.

All four series are available and are currently displayed in the front lobby on the trolley.

When the calendar says 'May 1st', I can't help but remember the many times I made and then delivered May Baskets to the folks in my neighborhood. Dad would help me with the flowers, Mom would prepare a few goodies, and then they would waken me early the next morning and I would have the baskets all delivered before going off to school. Did any of you receive a May Basket this year??

We wish you all a happy, sunny May Day.