Update from Zack in Ghana

Summer resident, Zack Nolan, is spending this semester in Ghana and has sent us this update on his activites . . .

... life continues in West Africa. Problems with the water
and electricity continue to remind me that I'm not living in the US,
as well as staying up late to watch evening baseball games. While I'm
really bummed the sox lost last night, my body is very relieved not
too have to stay up another night to watch the game. Luckily, I have
a Nigerian friend who lives above me and has DSTV, which broadcasts
ESPN. The games have been on from midnight to generally 4 in the
morning, and I've been jumping around his room in the dark, silently
yelling at the TV as he and his roomate sleep.
School is going well, we're just past the midway point in the
semester, and my Twi class ended a week ago, I'm not fluent by any
means, but at least I have an understanding of the language. Notably,
this weekend I'm traveling to the Northwest corner of Ghana with a
couple of American classmates and our Archaeology professors to stay
at their dig site for the weekend. I'm really excited to actually go
to an Archaeological dig, and hopefully I'll get to do some work for
them. I'm sure I'll have some good stories about it next week.
I've gone on small excursions the last couple of weekends, both with
the program and without. Last weekend I traveled to Takoradi with a
number of friends. We stayed in the town, and we were able to explore
the modest market and somehow find a back alley chop bar (food stand)
where we had rice balls with chicken in groundnut soup. Alot of
dishes necessitate eating with your hands, this one included. The
most common are Banku and Fufu, which are made from some local
variation of corn, i think. Anyway, its like eating very nutritional
playdoh, which you scoop up with your hand and dip in a soup
(groundnut is the best). Chop bars and restaurants all provide bowls
of water and soap for washing your hands. Its an experience. While
in Takoradi we also went to the World Cup Qualifier football match
between the Ghana National team and Lesotho. The stadium was built
for only 15,000 people but about 30,000 crammed and stampeded (of
which i was a part of) into the stadium to watch. We won 3-0, and
Ghana moved on to the next qualifying round.
This past weekend, CIEE took us to Kumasi, the capital of the Ashanti
region. Kumasi is known as the cultural center of Ghana, and still
preserves the history of the Ashanti kingdom, the most powerful in
Ghana. They have a very interesting culture, which includes a
matrilineal system of succession, with the queen mother choosing the
next Ashanti king. Women are very important in Ashanti society and
history, and in Kumasi's market, which is the biggest in West Africa
(its an enormous maze of little stalls filled with people selling
everything from cow heads to
machetes to beauty care products) 90% of the shops are owned and
operated by women. Kumasi is also famous for its Kente cloth, which
is, on the other hand, only woven by men. The traditional belief was
that women could not get pregnant while weaving (which was
unacceptable), so now it is a skill passed down by men. We visited
one of the local towns where they weave Kente, and saw how they
operate their looms. All in all, the weekend was not that exciting,
especially because we stayed in a big, new hotel with a distinctly
Western feeling, but still interesting. This week I plan on catching
up on sleep, logging some time at my internship, and crying about the
end of my baseball season. Hope to hear from you all sometime soon,
and I promise I'll send out another email soon. I can't believe my
semester is already half over.

A Dog Story for the Ages 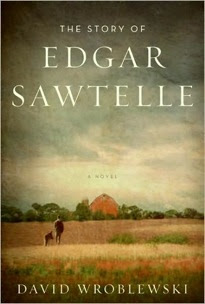 I am completely smitten. The object of my newfound devotion is, alas, fictional. She’s a heroine of surpassing grace and faithfulness, equaled only by her intelligence and sense of smell. This paragon of virtue is named Almondine. And I should probably mention that she’s a dog.

Wait! Come back! Would it help if I promise that at no time does she break into song, perform a soft shoe, or crack wise about 1990s pop culture? Nor does she slurp spaghetti or battle the Red Baron. (I happen to find those last two traits endearing in a canine, but I understand some people grow weary of anthropomorphic animals.)

Almondine is all dog. Specifically, she is Edgar’s dog. And Edgar Sawtelle is the utterly disarming teenage hero at the center of David Wroblewski’s wonderful debut novel of the same name. Set on a small farm in rural Wisconsin, The Story of Edgar Sawtelle takes all kind of risks. The hero is mute, a few chapters are narrated from a dog’s point of view, and there are all kinds of ways the novel could have dissolved into a syrupy mess.

Instead, Wroblewski creates a tender coming-of-age story and grafts onto it a literary thriller with strong echoes of Shakespeare and “The Jungle Book.” The result is the most hauntingly impressive debut I’ve read all year.

Edgar grows up in a modest farmhouse, surrounded by his loving parents and several dozen dogs, which the family breeds and trains. (This isn’t the kind of training offered by the local PetSmart; it takes more than a year for them to teach the dogs how to communicate.)
The family business was started by his grandfather, who read the work of geneticist Gregor Mendel and spent his life trying to create a new breed of dog that was marked by its intelligence and humor.

“Your grandfather didn’t care about breeds. He always thought there was a better dog out there somewhere,” Gar, Edgar’s father, tells him. “The only place he was sure he wasn’t going to find it was in the show ring….” John Sawtelle also was very choosy about whom he would sell his dogs to and wasn’t above “rescuing” a dog if its new owners didn’t treat it properly. “Most of the time he just sent them a check and told them to get a beagle.” (Speaking as a beagle owner, ha!)

Almondine is the ultimate in “Sawtelles,” as the dogs are known. After Edgar’s birth, she takes on the job of being his voice and companion. Edgar can’t cry, so Almondine makes his needs known to his parents, licking his mom awake when the dog hears the baby’s faint huffing sound. (Edgar’s inability to speak is never explained; a little girl tells him her grandma “says that before you were born, God told you a secret he didn’t want anyone else to hear.”)

The companionship between Edgar and Almondine is beautifully written; anyone with memories of a beloved childhood pet will be charmed.

Into this Eden returns Edgar’s Uncle Claude, who’s got the family knack with animals but an unsettling manner about him. “Fixing the barn roof, it turned out, was a perfect job for Claude. It hadn’t taken long to see how ferociously solitary the man was. A day spent alone climbing the ladder and ripping tarpapered shingles from old planking left him whistling and jaunty…. He might have been earning his keep, but the barn roof was also a convenient surveyor’s point, a perch from which their entire, insular little kingdom was revealed.”

He and Edgar’s father have a falling-out, and it looks as if Claude is gone for good. Then Gar dies suddenly, and an overwhelmed Trudy turns to Claude for help with the kennel. The doctor diagnosed an aneurysm as cause of death, but 14-year-old Edgar becomes convinced that his uncle poisoned his father.

That’s about when a reader notices that Trudy tends to be a nickname for Gertrude and that Claude sounds an awful lot like Claudius. Egad – Edgar’s trapped in the plot of “Hamlet.” Run, kid, run! And he does, gathering up his pack and heading for the Canadian woods like a mid-century Mowgli.

Jane Smiley is obviously the most successful author to rewrite Shakespeare onto an American farm, but despite some superficial similarities with her Pulitzer Prize-winning 1991 novel “A Thousand Acres” “The Story of Edgar Sawtelle” reads like an entirely different breed. Wroblewski’s novel is a bit less of a remake, for one thing.

For another, I found “Edgar Sawtelle” more enjoyable on a personal level than “Acres.” After all, it’s hard for an English major not to be tickled by the idea of a mute Hamlet. (Plus, I just like “Hamlet” more than “King Lear.”) Edgar might be silent, but his story will echo with readers for a long time.
Dog lovers of the world, what are you waiting for? Fetch!

This article by Yvonne Zipp appeared in the Christian Science Monitor.